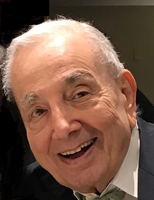 John N. Romano, Champion of the People, passed away peacefully on August 8, 2019, surrounded by his family and friends. He was born on August 23, 1927, in North Versailles, PA. Raised in a cold water flat in the 7th Ward of Yonkers, he went on to become an important figure in the city's legal and Italian-American, Portuguese-American, and other cultural communities. With humility, John often noted that his first job was shining shoes as a boy to help provide for his family. World War II drew him into the Marine Corps at seventeen, and he went on to serve in China in 1945-46 during the close of WWII and the Chinese Civil War. His brothers, Joe and Anthony, also served; Joe was killed in the Battle of Saipan, and Anthony became permanently disabled while in the Naval Submarine Corp. John was a life-long member of the Armando Rauso AMVETS Post 40. Upon returning home from China, John pursued his undergraduate and law degrees, graduating from New York University in 1949 and St. John's University Law School in 1952. In 1953, he married Mary Louise Meyer of Tuckahoe, a teacher. John and Mary Lou celebrated their 66th wedding anniversary on July 4, 2019. Throughout his legal career, John represented thousands of families from all walks of life. In 1959, he testified before the U.S. Senate's McClellan Committee Hearings and was questioned by the soon-to-be president, John F. Kennedy. His other prominent work included helping Holocaust survivors receive compensation, and serving as a NYS Judge Advocate of AMVETS and President of the Yonkers Board of Education in 1977. Most notably, he created and supported community organizations that helped others realize the American dream. John's altruistic approach to practicing law improved the lives of thousands of Yonkers's families. John practiced our Lord's word, loving thy neighbor as thyself through his tireless commitment to his clients, regardless of their ability to pay. He practiced several areas of law and did his best to accommodate all who came through his office door. John's colleagues remember his zealous advocacy, rich personality, and tireless pursuit of justice. John was a longtime parishioner of Our Lady of Mt. Carmel Church in Yonkers. He dedicated a stained-glass window at the Church in honor of his brothers' Fourth Marine Division. John was proud of his Italian-American heritage and greatly appreciated Italian culture and cuisine, often by sharing a simple plate of pasta with family and friends. He and Mary Louise often traveled, starting with a honeymoon in Post-WWII Europe and subsequently visited much of the globe. John is survived by his beloved wife, Mary Louise Romano; six children: John (Celeste), Andrew (Nuhad), Ellen (Stephen) Dorr, Joseph, Daniel (Carla), and Amy (Brian) Silfer; and thirteen grandchildren. His sons Andrew, Joseph, and Daniel carry on his legacy as local attorneys. His oldest son, John Jr. of Baldwin N.Y., is a retired teacher and coach. After more than six decades, John retired from the practice of law last November at the age of 91. He loved and provided for his family and served his country and community with honor and integrity. He never forgot where he came from and was proud of being from Park Hill. He will be greatly missed but we are comforted knowing he is reunited with his mother, father, brothers, sisters, the Thursday Night Boys, and family dogs, Charlie, Margie, and Bailey. The family will hold a service at the Sinatra Memorial Home in Yonkers, NY, on Wednesday and Thursday from 2-8 PM. Funeral Mass at Mt. Carmel Church on Friday at 10 AM. In lieu of flowers, friends may contribute to the Enrico Fermi Educational Fund of Yonkers, Inc. Donations to Treasurer Anthony Maddalena, 13 Ann Marie Place, Yonkers NY 10703.