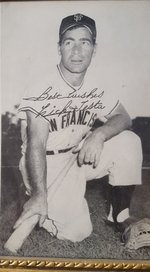 Please share a memory of Nicholas to include in a keepsake book for family and friends.
View Tribute Book

Nicholas “Nick” Testa passed away on Nov. 16, 2018. He was 90.
Born to Italian immigrants, Nick grew up in the Bronx and proudly served his country during the Korean War.
He lived his dream of becoming a professional baseball player, most notably as catcher with The San Francisco Giants in 1958.
He graduated with a Master’s Degree from NYU and was Lehman College’s first baseball coach. Nick was inducted to Lehman’s Athletics Hall of Fame in 2001.
After retiring from Lehman, he joined his beloved New York Yankees as Batting Practice Coach. His greatest honor was wearing those famed pinstripes and serving on five World Championship Teams.
He is survived by nieces Joan Aufieri Tretta and Dr. Carolyn Testa Casino (Dr. Joseph E.Casino) and nephews Thomas Testa & William Testa. He is Great Uncle to Joseph Tretta Jr., Joseph A. Casino, Matthew Casino & Christina Casino.
Nick is predeceased by his nephew Father Robert Aufieri and his niece June Digirola.
Wake is Monday Nov 19 from 4pm to 8pm at Sinatra Funeral Home, 499 Yonkers Ave, Yonkers, NY
Mass of Christian Burial is Tuesday Nov 20 at 10am at St. Clare’s Church, 1027 Rhinelander Avenue, Bronx, NY
Interment to follow at New St. Raymond’s Cemetery, Bronx, NY

Share Your Memory of
Nicholas
Upload Your Memory View All Memories
Be the first to upload a memory!
Share A Memory
Plant a Tree