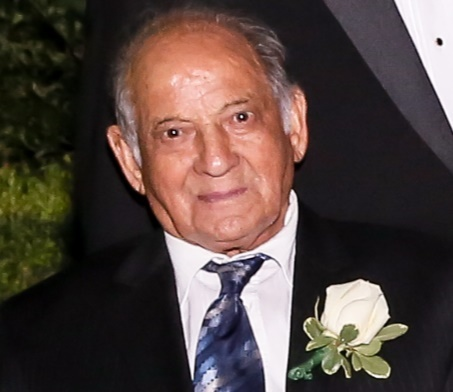 Please share a memory of Rosario to include in a keepsake book for family and friends.
View Tribute Book
Rosario Giuseppe Barbieri, of Yonkers, New York, passed away peacefully at the age of 95, surrounded by his loved ones on May 10, 2018. Rosario was a beloved husband, father, grandfather and great-grandfather. His favorite pastime was watching Italian soccer; his favorite team was Napoli and he would always cheer them on. Having moved to America from Italy, he was also an avid New York Knicks fan. Rosario loved spending time with his wife, Carolina, in their garden where their green thumbs allowed them to produce hearty vegetables and beautiful flowers. You could always catch Rosario playing cards and dancing at every family party with all of the women! Rosario loved his family unconditionally and we will always remember how he made us all laugh with his funny jokes and how he brought joy to the people around him. He will forever be in our hearts. Born in Cardinale, Provincia di Catanzaro, Calabria, Italy on September 23, 1922 to Francesco and Elisabetta Barbieri. Rosario married Carolina Apa on December 22, 1951 in Calabria, Italy. He proudly served his country of origin, Italy, in World War Two (1939-1945) while stationed in Montenegro. Rosario and Carolina immigrated to Yonkers, New York on October 25, 1970 with their five children. While in the United States, Rosario worked as a member of Labor International Union North America, Local 235 for over 16 years and he also worked at Robert Martin Construction for over 10 years. Rosario is survived by his 5 children: Elisabetta Luciano (Franco), Frank Barbieri (Rosetta), Gregorio Barbieri (Angela), Maria Ranellone-Steigelman (Richard) and Graziella Leone (Giuseppe); his 15 grandchildren: Carolina (Armando), Nicolina, Graziella (James), Gregorio Jr., Francesco (Tina), Joseph, Stephanie (Saverio), Anntonia, Christina (Matthew), Antonella (Ralph), Olivia, Giuseppe Jr., Giovanni, Massimo, and Lucia; and his 8 great-grandchildren: Charles, Dante, Adam, Ariella, Aidan, Isabella, Angelina, and Serena Ines. Rosario is predeceased by his parents, Francesco and Elisabetta, his wife, Carolina; his sisters, Caterina and Rosa; and his brothers Rocco, Nicola, and Michele. Visitation is scheduled for Monday, May 14th from 4-8 PM at Sinatra Memorial Home, Inc. at 499 Yonkers Avenue, Yonkers, New York 10704. A Mass of Christian Burial will be celebrated on Tuesday, May 15th at 10 AM at Saint Ann's Church at 854 Midland Avenue, Yonkers, New York, 10704. Interment will follow at Ferncliff Cemetery at 280 Secor Rd, Hartsdale, NY 10530. May he rest in the presence of the Almighty God.
Monday
14
May

Share Your Memory of
Rosario
Upload Your Memory View All Memories
Be the first to upload a memory!
Share A Memory
Plant a Tree