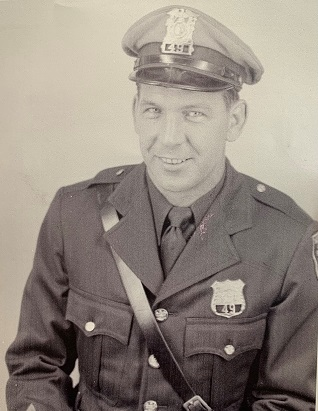 Loving Father/Grandfather/Great Grandfather Edward J. Yurus Sr. died peacefully in his home on Sunday, November 15, 2020 at the age of 98.

In 1942 Edward was drafted into the 10th Mountain Division of the United Stated Army during World War II. He fought in the famous Po Valley battle, considered by many a turning point of the war. During this battle he went behind enemy lines and fought valiantly. Because of his heroic service he was offered the distinguished Bronze Star Medal, which he humbly declined to accept because he said his reward was to be able to return home to his family while many others did not. In May of 1945 Edward was awarded "The Combat Infantryman Badge," for his performance of duty in ground combat against the enemy while attached or assigned to the 85th Mountain Infantry.

After his discharge in 1945, Edward worked as an auto mechanic in Sears, Roebuck & Co. and later was a Parkway Patrolman with Westchester County Police Department. Edward retired from the department in the mid-1970’s.

A single writing won’t come close to communicating all he taught us over the years, he was a stalwart of lessons, principles, sacrifice, service, and many nicknames for those whom he loved.

Among the highlights he taught the importance of working with your hands, diagnosing problems, and working out a solution. He also spent hours elbows deep in oil; fixing a seemingly endless line of cars.  Many times, while people were stuck on the road at all hours of the night.

He had tremendous pride in service of his fellow man. He was so proud of his service in the 10th Mountain Division, he was one of the last surviving WWII vets. Edward did not talk to many people about the details of the war, unless you caught him at one of his famous sleepovers with one of his grandsons.  You would hear him tell them stories of taking sniper fire while getting a furlough in Italy, his motorcycle tires melting while he rode up an active volcano, and about the sheer fear in his boat ride towards Japan where he was expecting that he would not survive because he had survived too many close calls in Europe. He was proud to be an American and defender of our freedom, but he always said, “I didn’t defend a place, I defended people.” He always felt strong about serving his fellow man and tried to ingrain that in his kids, grandkids, and great grandkids.

He fostered a growing conviction in the importance of faith and family. The man lived near a century, functionally independent until very recently. When asked the secret to his long full life he would say, “I wake up every day, think of the great family I was blessed with, take as deep a breath as I can.... hold it for just a second, exhale and say, "Thank God for another breath and another day with my family.” He was fiercely loyal to family and taught that there was not much in life more important.

In addition to his love for his family, one of his great passions was his dedication to serving as a mentor and father figure to the children of the Park Hill/Nodine Hill section of Yonkers through his many years of coaching. He was also a member of the board of directors of the Park Hill Boys and Girls Club. He particularly took personal interest in swimming, golf, and baseball and saw his children and grandchildren go on to play these sports at the collegiate level.

Finally, he was always one to impart pearls of wisdom among of which these were the most common:

Always stop and think. If it’s not yours don’t touch it. If you don’t have something nice to say, don’t say anything at all.

One of his greatest joys in life was attending concerts, parades, recitals, graduations and any form of sports that his kids, grandkids and great grandkids were involved in. I don’t know of a person that lived the scripture as well as Edward, that says “no greater love does a man have than to lay his life down for his friends.” He truly lived a life of selfless sacrifice. As he once stated, after a Thanksgiving toast where generations of his family paid tribute:

“It was my pleasure” and “I love you all and I’m so glad you’re mine.”

Funeral service on Friday, November 20th 2020 at 10am at Sinatra Funeral Home internment at St. Mary’s Cemetery to follow.

Masks and social distancing required.In Lieu of flowers please consider adding to Edwards legacy by donating to the National Association of the 10th Mountain Division, whose mission is to preserve and enhance the legacy of the 10th Mountain Division for future generations. Their goal, among other things, is to provide aid to wounded warriors and scholarships to their families. You can donate in Edwards memory by using this link: https://everloved.com/life-of/edward-yurus-sr/donate/?flow=203 or you can give directly on their website https://10thmtndivassoc.org/

Share Your Memory of
Edward J.
Upload Your Memory View All Memories
Be the first to upload a memory!