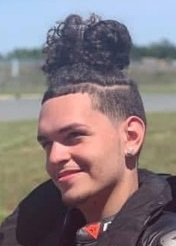 Please share a memory of Jose to include in a keepsake book for family and friends.
View Tribute Book
Jose Martin Maldonado Jr. better known as Cheo or Cheito was born on Friday March 1, 2002 weighing 10lbs to parents Reina Bello and Jose Maldonado. He is survived by his parents and sister Ashley Maldonado. As a child growing up, Cheito was grouchy and antisocial in a cute way. We all considered him an old soul. He disliked being kissed and being out at events. He also didn't like any one touching his hair or drinking from his straw because people had germs including his mom. He would wipe his cheek and give you a mean stare if you touched him. Then it was like a switch turned on, and everything changed, he was the most lovable human being, but still please don't touch his hair or drink from his straw. Even though he didn't like get togethers he would still show up for 5 minutes, say his hellos and bendición as well as always light up the room he walked into. When he spoke about his future wedding he described it as a super extravagant wedding. He wanted a mob wedding with angels hanging from the ceiling at St. Patrick Cathedral with lots of flowers as he walked down the aisle. He was humble, extremely confident in himself, ambitious and bougie. He would look in the mirror and fully admire himself. Cheito was raised Catholic. He graduated from Metropolitan High School and went on to attend Berkeley College where he was majoring in Business Management. While attending college he also worked at Dainese NYC, a sportswear store mainly focused on Motorcycle gear. He was so great at what he did at Dainese, that he was selected to go to Texas to represent Dainese NYC at a MotoGp race event. From the moment Cheo was able to express himself, he demonstrated his love for cars (KOENIGSEGG) and motorcycles. He became really passionate about starting a professional motorcycle career at the age of 16. He went to every race tracks with his "momager" and dad, they were 100% supportive in trying to make his dream come true. They would go to every race track with him. It was even to the point where everyone started thinking his mom was more into racing then he was. Cheo was extremely close to his family. Him and his mom had a bond that was truly unbreakable. He started a small business to fix and enhance motorcycles which he knew that him and his dad were going to become a beast at it together. Cheito always looked up to his sister which she always considered him her little spoon. As much as he looked up to her, she admired him for being the strong little big brother. Cheito was an amazing son, brother, brother-in-law, boyfriend, grandson, nephew, cousin, Godson, co-worker and friend. Cheito will forever be in our hearts and will be missed dearly by everyone whose life was touched by him.
Sunday
25
September

Share Your Memory of
Jose
Upload Your Memory View All Memories
Be the first to upload a memory!
Share A Memory
Plant a Tree