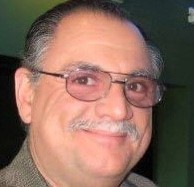 Please share a memory of Calvin Peter to include in a keepsake book for family and friends.
View Tribute Book

Calvin Peter was born August 25, 1956 in Mt. Kisco, New York. He comes from a family that has been a part of this community since the early 1900s. His maternal grandfather was Felix Anthony DeLaura and his wife, Philomena began their legacy on Maple Avenue with his wife and 10 children. Being a part of the Mt. Kisco community continued at St. Francis Catholic Church.

Calvin Peter was raised in nearby Bedford where he attended St. Patrick's Catholic School and served as an Altar Boy. He graduated in 1974 from Fox Lane High School, and grew up as an avid Yankees baseball fan.His enthusiasm for his team continued throughout his adult life. Peter began his passion for golf and enjoyed playing on different courses including Winged Foot & Bedford Country Club.

He received his Associates degree in Mechanical Engineering from Westchester Community College.

In 1981 he was hired by Stord-Bartz America as a Draftsperson. They were a Norwegian company specializing in fishmeal processes based in White Plains.

As a couple they enjoyed playing golf and traveling to visit family.

ln 2007, the company, Haarslev, relocated their headquarters to Kansas City. Calvin followed suit, and established his home near the new office. There, he continued his loyalty to the company for over 42 years. Over the years, he transitioned from drawing layouts to doing Auto-Cad layouts in 3-D.

He took pride in being apart of the DeLauro/DeLaura Family. Over the years, would return back to the area to attend important family events. He is preceded in death by his parents Betty (DeLaura) and Calvin DeLauro. He leaves his wife of 24 years, Brenda Ann Kerns DeLauro, and cousins who adored and respected him.

Share Your Memory of
Calvin Peter
Upload Your Memory View All Memories
Be the first to upload a memory!
Share A Memory
Plant a Tree