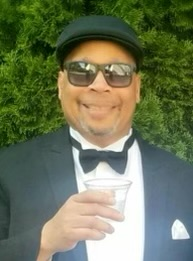 Please share a memory of Lance to include in a keepsake book for family and friends.
View Tribute Book
Lance E. Jacobs passed away surrounded by his family on December 11, 2022 at the age of 64. Son of Virgina Jacobs, he was born on May 15, 1958 in Bronxville, NY. He attended school in Yonkers, NY before relocating to Riverside, California with his uncle Richard and graduated from John W. North high school. He joined the U.S Army in 1975 and served until 1979 as a Medical Specialist. Having a passion for camping and community, Lance created East Harlem Outdoorsmen, alongside his best friends Siro and Carlos. For 30+ years, East Harlem Outdoorsmen hosted annual father and son camping trips for the young men of Harlem and Yonkers. Camping fostered a brotherhood amongst Lance and his friends and mentorship, responsibility, honesty and trust in the children in the program. Lance loved his job at the World Trade Center and dedicated most of his time to work and his community. Family, work, camping, and cooking was everything to him! Lance was a dedicated father and was intentional in the life lessons and love he instilled in his children. He is survived by his children Javier (Nicole), Ernesto, Latia, Jazlyn (Alexander), Paula and Tammy, his former wife Yvonne, seven grandchildren who knew him as papa (Alexis, Christian, Aden, Lauren, Izabella, Noah and Cali). Lance was a special brother to his siblings, Melinda, Richard, Daron, Enid and Leona. He leaves to mourn two Aunts Hazel and Patricia, Uncles Richard and Ira and many nieces and nephews. Lance was preceded in death by his mother Virginia Jacobs and Grandmother Bernice Williams. Special thanks to his very special friends Siro, Carlos, Alfonso and Angel! He will always be remembered by his family & friends for his loving heart, sense of humor and outgoing personality. He will be missed tremendously by so many.
Wednesday
21
December

Share Your Memory of
Lance
Upload Your Memory View All Memories
Be the first to upload a memory!
Share A Memory
Plant a Tree