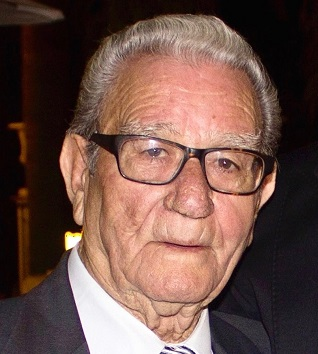 Please share a memory of Giuseppe to include in a keepsake book for family and friends.
View Tribute Book
Giuseppe (Joe) Rotolo passed away at home peacefully on December 25, 2022 at 89 years old. He lived in Campobello di Licata from his birth until he married Rosa Caizza in 1959 and moved to the United States. Eighteen years later, he returned to Italy and continued to raise his family there. Years after his wife had passed away, he joined his daughters in the US once again and lived out his life surrounded by family and love. He was a devoted husband to Rosa, and a proud father to Pietrina Rotolo of Bedford Hills, and Sally Marie (Michael) Cambareri of Mount Kisco, New York. He was an adoring grandfather to Angelo and Rocco. He was predeceased by parents, Pietra Savarino and Giuseppe Rotolo, brothers: Giovanni, Pietro, Carmelo. He is survived by brothers Salvatore and Michele. His love of family was always at the forefront of his life. He took enormous pride in providing for his family, working multiple jobs and later, becoming an entrepreneur in the field of agriculture, including owning and cultivating a successful vineyard. His charismatic personality was a magnet to many and created friendships far and near. His generosity that he was known for, indeed, knew no bounds. He approached life like he approached his love of dancing and music with energy, happiness and unwavering passion. He took great delight in always presenting himself in a distinguished and well kept manner and impressed many that met him with his larger than life personality. His hobbies included hunting, playing cards, western films, and being a member and president of the club Circolo Coltivatori Diretti. Incredible facets of his personality, ranged from family man, wise advice giver, businessman, and a very delightful and good sense of humour; sharing many silly moments of innocent childlike playfullness with his grandsons, Angelo and Rocco. He was one of a kind and will truly be missed by many.
Monday
2
January

Share Your Memory of
Giuseppe
Upload Your Memory View All Memories
Be the first to upload a memory!
Share A Memory
Plant a Tree