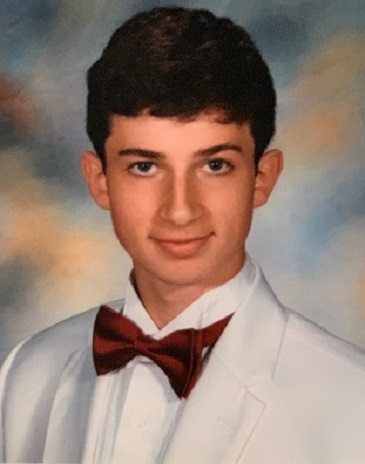 John “Jack” Howard Lundin of Crestwood, New York, died unexpectedly on Wednesday, October 14, 2020. He is survived by his devoted family including his mother Diane Clerkin, sister Megan Lundin and stepfather Rocco Pozzi, all of Crestwood; father Paul Lundin of Scarsdale; grandparents Mary Jane and John  Clerkin of Scarsdale, and Loraine and Howard Lundin of Mercer, Pennsylvania; aunts and uncles, John and Denise Clerkin of Croton-on-Hudson, Suzanne and Richard Clary of Rye, Cara and Brian Lundin of Poughkeepsie, New York; stepbrother Michael Pozzi (Nicole) of Armonk, stepbrother Christopher Pozzi (Juliana) of Danbury, Connecticut, stepsister Trisha Pieratti (Ken) of Tarrytown, New York; cousins Grayson Clary, Taryn Clary, Amy Clerkin, John Clerkin, Alexa Lundin, Christina Lundin, and Morganne Lundin; niece Samantha Pozzi and nephew Jacob Pozzi; and many close friends. Jack was born on June 20, 2002, in White Plains, New York. He attended Immaculate Heart of Mary School and the School of the Annunciation. He graduated from Fordham Prep in 2020. Jack had just started as a freshman at Syracuse University where he was studying magazine, news, and digital journalism at the Newhouse School of Public Communications. He had dreams of eventually pursuing a career in media and TV and his high energy and engaging personality would have certainly carried him far in that field. Jack will be missed immensely by his family and everyone who shared his company. He always had a bright outlook on life and an amazing sense of humor.  He will be remembered as the kind of young man that anyone would be proud to call son, brother, grandson, cousin, and friend. In keeping with his spirit of giving and caring for others during his lifetime, Jack gave the gift of sight and science to others as an eye and tissue donor. A wake will be held at Sinatra Memorial Home, 499 Yonkers Avenue in Yonkers, New York on Sunday, October 18 with visiting hours from 4 – 8 pm. Covid-19 safety measures will be observed. Funeral services will be held on Monday, October 19 at 10:30 am at Immaculate Heart of Mary Church, 8 Carman Road, Scarsdale, New York. Monsignor Robert Clerkin and Father Paul Tolve will officiate. The mass will be streamed live for those unable to attend in person. A private burial will take place immediately following at Gate of Heaven Cemetery in Hawthorne, New York. In lieu of flowers donations may be made to the Jack Lundin ‘20 Memorial Scholarship for Journalism at Fordham Preparatory School online at https://www.fordhamprep.org/giving/donate-now or by mail, Fordham Preparatory School, 441 East Fordham Road, Bronx, New York, 10458, Attention, Jose R. Gonzales, Vice President. The scholarship will be awarded to a rising senior interested in pursuing a major in writing or communications in college.

Share Your Memory of
John
Upload Your Memory View All Memories
Be the first to upload a memory!