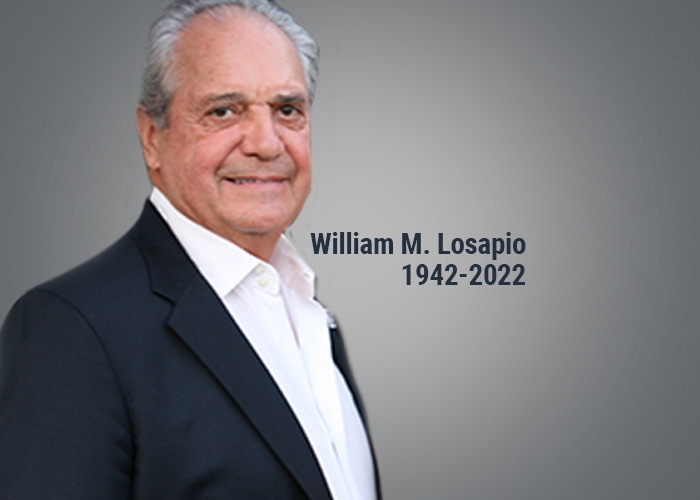 William M. Losapio – co-owner of the former Sergio's and Gregory's restaurants in Hartsdale and White Plains respectively, road manager for the singer Engelbert Humperdinck and WAG adviser – died at his Valhalla home on the evening of April 18 at age 80. The cause, son William Jr. said, was acute myeloid leukemia (AML), a rare and particularly aggressive form of the disease.

"Billy (as he was known to friends, family and acquaintances in the hospitality industry) was a supportive, sensitive and loving adviser," said Dee DelBello, publisher and CEO of Westfair Communications Inc., parent company of the Westchester and Fairfield County Business Journals and WAG magazine. "I shall miss his insights and suggestions. A perfect host, he was a kindly, gracious man who would listen intently and make you feel like the most important person in the room. His passing has created a vacuum among my friendships."

Often that wisdom and sympathy would be dispensed at Sapori of White Plains, the Italian restaurant that ultimately succeeded Gregory's. Though Losapio had long since sold Gregory's, he retained ownership of the property and served as a kind of godfather to Sapori owners Sammy and Kenny Balidemaj. Many were the delightful luncheons that he hosted there for members of the WAG staff.

By then, Losapio was a hospitality legend in Westchester County. At age 22, he went into the restaurant business with brothers Sergio and Gregory – who were 12 and 10 years older respectively and who would give their names to the establishments, a few miles apart from each other on Central Avenue, that their kid brother would manage. The restaurants were never just about Italian cuisine. The entrepreneurial Losapio was interested in the entertainment business. Sergio's, which had been a diner, became a cabaret-restaurant that the brothers would own from 1964 to '93. Gregory's, which the brothers had from 1971 to 2006, was always studded with bold-faced names. As WAG noted in its July 2014 piece on Sapori:

"From politics to the Rat Pack, (Losapio) ran in enough of the right crowds to rub elbows with the likes of Nelson A. Rockefeller and Frank Sinatra. Both dined at Gregory's, plus legends like Dean Martin, Liza Minnelli and Bette Midler."

But it was Losapio's beloved mother, Yolanda, who would provide the impetus for his second career with another musical star. In the late 1960s, she told her youngest son that she wanted to see a certain British singer with an unforgettable German stage name, Engelbert Humperdinck, who was performing in Manhattan. And she wanted to go in style – in a limousine, recalled Losapio's wife, Lucille. Losapio complied, accompanying his mother to the concert. Through a friend, they managed to visit backstage. It was the beginning of a personal and professional relationship as Losapio became the singer's road manager from 1979 to '81 and then again from 2006 to '10.

William M. Losapio was born March 11, 1942 in Yonkers to Biagio Losapio and his wife, the former Yolanda Raho – immigrants who came from southern Italy's Puglia region to the United States while in their 20s. They had just a couple of suitcases with which to pass through Ellis Island and live the American Dream. Biagio worked in the construction and ice trades. Yolanda worked in a blouse factory with her sister, Nina. Both of Losapio's parents were industrious. But in reflections he left behind that William Jr. graciously shared with WAG, it was clear that the parents were opposite in temperament. In the tradition of the time, Biagio was a distant breadwinner. The elegant Yolanda was the affectionate parent, particularly to her baby, who was so much younger than his brothers. What he learned from each parent in different ways made Losapio determined to be a loving husband to his wife, the former Lucille LaRosa, whom he married on June 13, 1982 and their two children – son William M. Jr. and daughter Cristina. They survive Losapio, along with Cristina's companion Mike Murnin.

Losapio was also a demonstrative friend, beginning each meal with a personal toast.

Indeed, you always knew where you stood with him and where he stood on any subject. A graduate of what is now Saunders Trades and Technical High School in Yonkers and a member of the U.S. Marine Reserves from 1960 to '67 when he was honorably discharged as a lance corporal, Losapio was fiercely patriotic. He raised money for organizations like Wounded Warriors at Knollwood Country Club in Elmsford, his home away from home, where he indulged his passion for golf.

When he was diagnosed with AML on Sept. 27, 2021, his golfing days, it would seem, were at an end. But even as he suffered through his illness, wife Lucille said he never forgot to say "please" and "thank you."

If there is an upside to cancer, a friend told him, it is that it reminds people of all the love they bear to those challenged by the disease. In his reflections, Losapio said he was astounded by the outpouring of love and support that he received.

But friends, family and acquaintances alike were merely reflecting the love he gave them.

A memorial mass will be held on Thursday, May 19th at the Grace Baptist Church in Mount Vernon. Service will start at 12:00 PM.

The family asks that all who would like to attend bring proof of vaccination and must wear a mask.